The history of Etna Brewery begins with Charles Kappler. A native of Alsace, and brewer by trade, Kappler first left his homeland in 1857 to come to the United States. In 1860 he was employed as a brewer in Yreka where he remained for five years. In 1865 he returned to Alsace and was married to Florentine Kriner in 1867. The couple returned to Yreka in December of that year. The following year, 1868, the Kapplers purchased Hartstrand Brewery that was located three miles east of Etna on the Hartstrand Ranch. The brewery was operated at this location before moving to a new facility in Etna Mills in 1872
​ 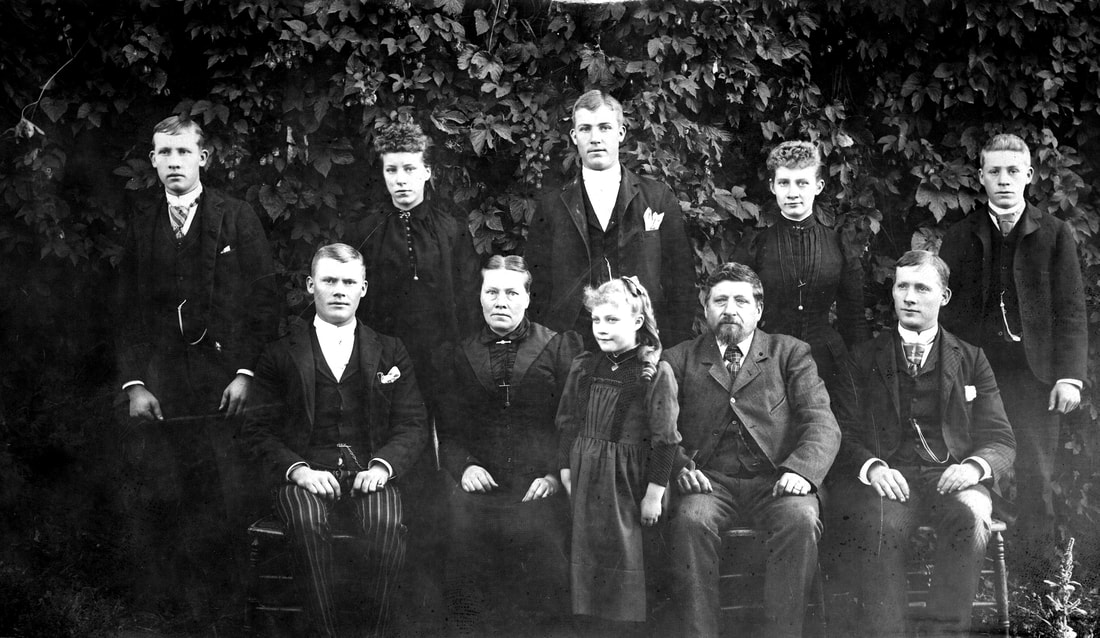 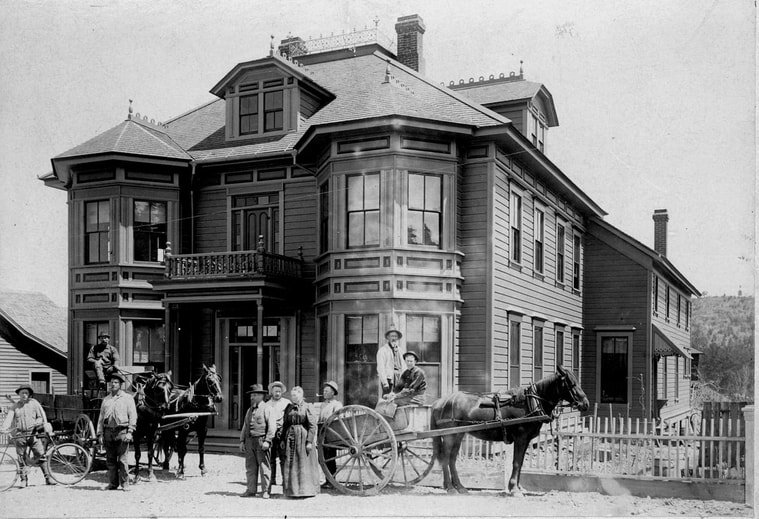 The Kappler home, built in 1895, was located on Main Street in Etna just above the brewery.
In additional to their large family the Kapplers boarded brewery workers and ranch hands in their home.
When the home sold it first served as a hotel and later as apartments. The home was demolished in the early 1970's when it was discovered that the walls were saturated with oil from leaking oil heaters and could not be salvaged. 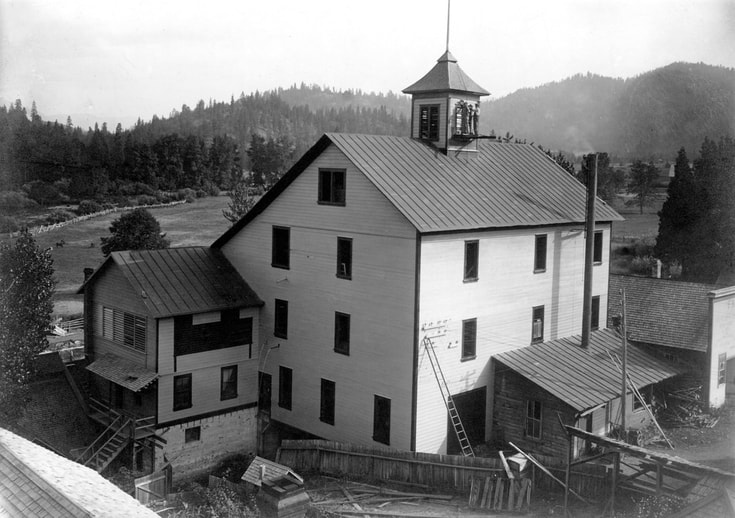 ​Kappler built the first brewery in Etna Mills in 1872. The structure was destroyed by fire in 1875 and was immediately rebuilt.
The building in the picture above was constructed in 1900 to accommodate a growing demand.
Kappler had wagons and horse teams that distributed the beer in northern California and southern Oregon.
​Kegs were shipped by mule train to Salmon River and Trinity County. 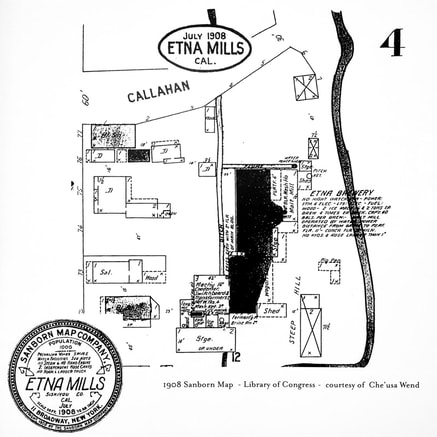 Prior to the discovery of the 1908 Sanborn map of Etna Mills we knew little of the actual workings of the old brewery.
​Notes on the map disclosed the following: 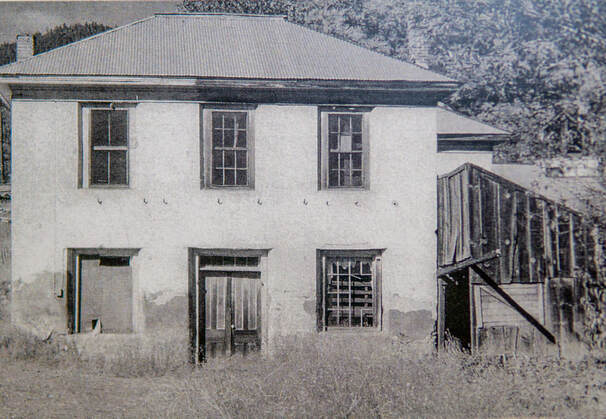 ​This concrete building was the core of the bottling works for the brewery.
Beer was transported to large wooden vats in the lower story.
A long wooden building projected out the back and beer was piped through a maze of copper pipes to the bottling equipment.
The upstairs was a residence for brewery workers. The Kapplers lived here while their home on Main street was being built. 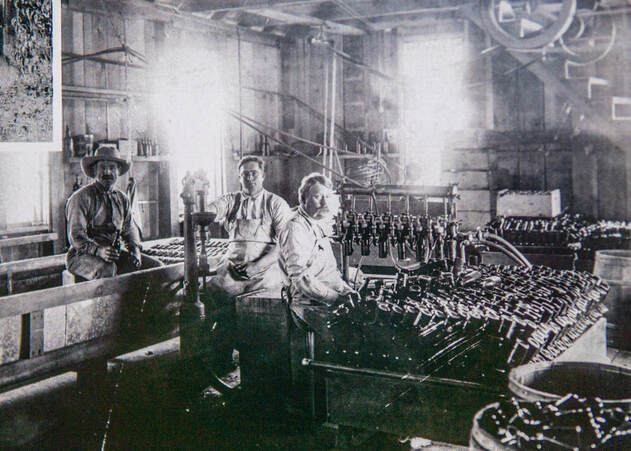 Bottling crew at work. Martin Marx (in hat), Joe Stark, Joe Kappler
​In 1897 we learn that Kappler was attempting to sell the brewery, it is not known why.
The following year the brewery is incorporated. We are aware that sons Joe, Charles, Jr., and Louis worked at the brewery.
Louis was the brewer and in 1903 went to Chicago to learn updated brewing methods.

Charles, Jr., Victor and Emil all owned and operated saloom in Etna. Montague, and Yreka 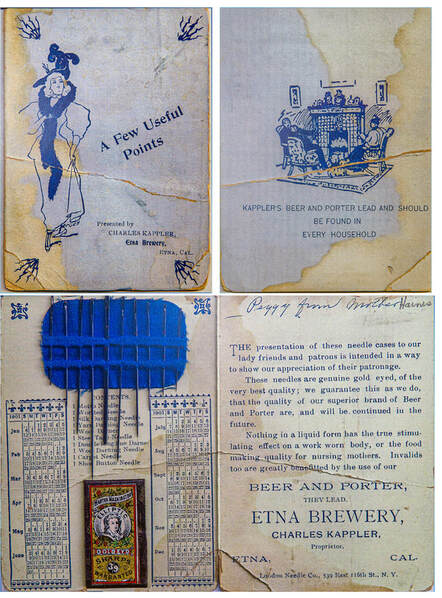 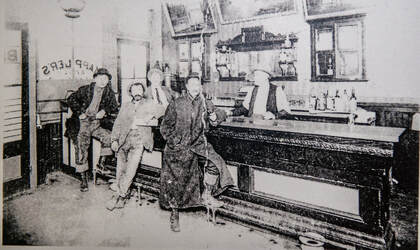 Above: Kappler's in Montague
Saloon Photos & Ads Courtesy of Siskiyou County Museum & Historical Society
Yreka Branch: ​Kappler's Saloon was located on the northwest corner of Broadway and West Miner Streets.
The men in the foreground are: Emil Kappler, Mike Wacker, Jo Brautlict and Joe (or Sam) Gibson
Holzhauser Hops
Charles H. Holzhauser grew 25 acres of Bavarian hops on his ranch just north of Etna. His crops were the main source of hops to Etna Brewery and other local breweries. The hops were also sold to markets as far south as San Francisco.
In 1905 Holzhauser was awarded a Gold Medal and diploma, by authorization of an Act of Congress, at the Lewis and Clark Centennial Exposition held in Portland, Oregon for "one bale 11 of hops raised in Scott Valley, Siskiyou County."
From the account book of Charles Holzhauser:
1893 Hops Picked: 15,281 lbs - Dried: 5,080 sold for .06 cents
1903 Hops Picked: 14,191 lbs - Dried 4,222 sold for 20.5 cents 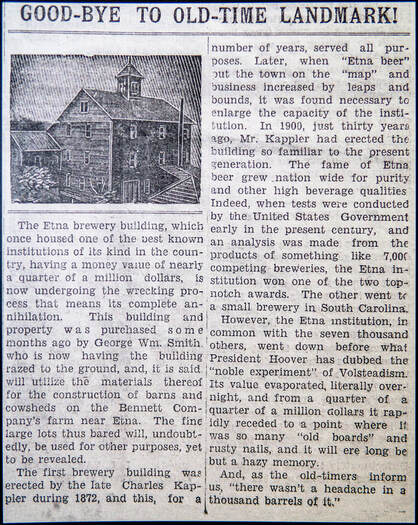 1919: Prohibition
The end of an era. With the passage of the 18th amendment and the Volstead Act,
Charles Kappler and his sons were out of business. In 1919 the business that had sustained the family for 47 years was done.
Charles died on his 86th birthday March 4, 1920. 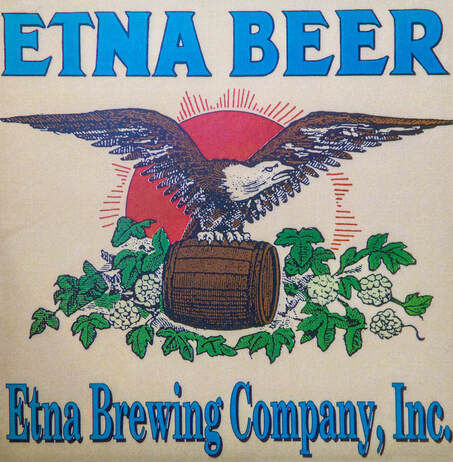 The Brewing Tradition Revived
1990: Andrew Hurlimann, an avid home brewer, was among the early pioneers of the microbrew revolution. In May 1990 Andrew, his wife Brenda, and a group of investors revitalized the brewing tradition in Etna with the opening of Etna Brewing Company, Inc.
​
2001: In May 2001 the brewery was purchased by Dave & Marilyn Krell. Recognizing the uniqueness and value to the community, Dave a homebrewer, farmer and mechanical engineer and Marilyn a former bank administrator, decided that the then struggling brewery was a worthy investment. Their goal was to continue the brewing tradition in Etna and create a pub with a family friendly environment for the community.